by The Corner Laughers 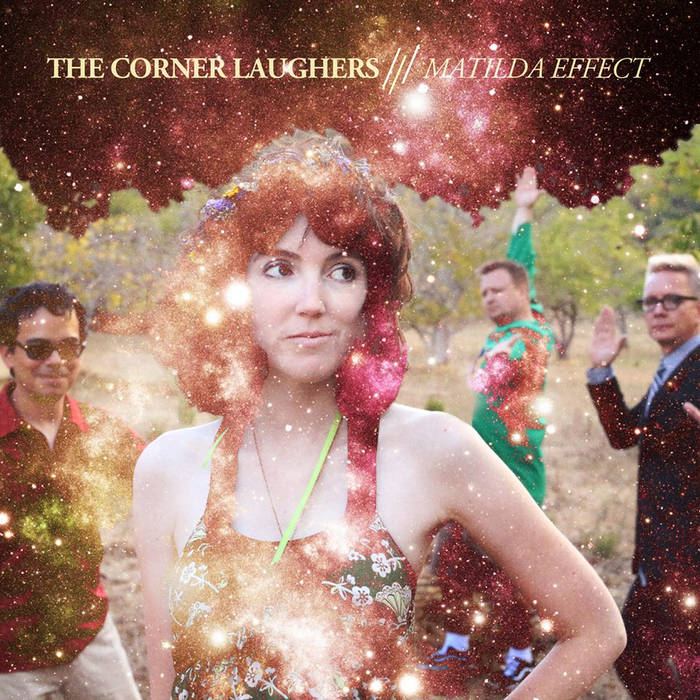 Ben Habegger Perfect summer album. Every song is interesting and leaves you in a great mood! Karla's vocals are also gorgeous and unlike anyone else out there. Favorite track: Martha (Cincinnati, 1914).

"If you drop breadcrumbs while you're off adventuring you'll lose your way in darkness, so we've heard. We learn about their failures across the centuries but at least they got to feed some hungry birds."

So declare the opening lines of "Matilda Effect," the new record by California's The Corner Laughers. The wry spirit of adventure contained within those words flows throughout the latest release from the band called "a nigh-on-perfect fusion of bubblegum-sweet tunefulness and clever, subtly barbed lyrics" (Icon Magazine.)

Yes, lead singer/songwriter Karla Kane wears cat-eye glasses, plays ukulele and goes birdwatching, but The Corner Laughers are no stereotype hipster-twee band. Kane's literate lyrics and "ridiculously catchy" melodies (Word Magazine) are backed up by the powerhouse combination of virtuoso guitarist KC Bowman and rhythm ninjas Khoi Huynh and Charlie Crabtree on bass and drums. And FYI, that ukulele is electric. An intriguing mixture of bookish and badass, together they create "rousing, visionary adult pop" (Tom Robinson's Fresh on the Net).

"Matilda Effect," named for the phenomenon of female scientists being overlooked in favor of their male colleagues, marks another step forward for the group, whose last release was the critically adored "Poppy Seeds" (2012). Cosmic-pop wizard Allen Clapp (The Orange Peels) produced the record, first from his midcentury-modern Silicon Valley studio, then from his woodland lair in the Santa Cruz Mountains. The Laughers took their time with "Matilda Effect," not only due to the change in studio locale but also because of some pretty major life evolutions. Three band members all became first-time parents in 2013.

These developments shine through in the songwriting, as Kane reflects with joy, fear, and wonder on her new daughter and identity as a mother. In fact, the record is full of feminine presence, not only drawn from personal experience but in an epic cast of characters including Cleopatra, Alice in Wonderland, astronomer Henrietta Leavitt, and Martha, the world's last passenger pigeon. As always, literature, history, and the natural world prove influential. And while their previous record was California-centric, the new work takes a decidedly more worldly tone, with much inspiration coming from recent tours and trips to England, Berlin, and Scandinavia.

The record contains all the hooks and harmonies essential to The Corner Laughers' sound and, while most definitely a pop lover's pop album, explores some psych, folk, and even almost-reggae territory. Wistful and dreamy at times, sly and sassy at others, "Matilda Effect" wanders through enchanted forests and stone circles, meadows and the Milky Way. It showcases the talents of the tight-knit foursome, plus a few notable guests, including Anton Barbeau (who also penned a track) and one purring Persian cat.

Fans of Belle and Sebastian, Kirsty MacColl, Allo Darlin', and XTC -- or anyone who craves music shimmering with smarts and heart -- rejoice. The Corner Laughers are ready to receive you.

Produced by Allen Clapp and The Corner Laughers